Ear acupuncture, otherwise known as auricular acupuncture or auriculotherapy has existed for thousands of years in China, Ancient Egypt and Greece, India and Scythia but was made popular in the 1950s by Nogier, a French physician whose research indicated over one hundred acupuncture points on the external ear and that these points and zones correlated to the position of an upside-down foetus. Nogier developed an integrated model of the ear based upon physchotherapeutic properties and embryology. Ear acupuncture was officially recognised as a treatment by the World Health Organisation (WHO) in 1987. Why ear acupuncture?

It is a cost effective fast-acting treatment that works well alongside naturopathic treatment to support lifestyle changes. It is also beneficial when combined with addiction counselling to prevent relapses. What I can treat with ear acupuncture? 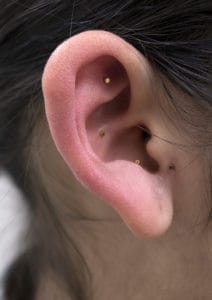 Ear acupuncture is the preferred treatment for all addictions and is used widely in rehabilitation and detoxification facilities globally. Acudetox is the single most significant reason for increasing popularity of ear acupuncture in the west and came about as a result of accidental positive results in relieving opium addiction in Hong Kong in 1972. The ear protocol was then developed in 1974 at Lincoln Memorial Hospital. The National Auricular Detoxification Association was formed in 1985 in the US and 1991 in the UK. It renamed Acudetox as the NADA protocol.

A 2000 study looked at the NADA protocol in a randomised controlled trial for cocaine dependence and saw promising results. Those who completed treatment abstained from cocaine for longer during treatment, and they were also more likely to be abstinent at the end of the 8-week treatment course than control subjects.

Battlefield Acupuncture is a technique used particularly with military veterans. It is a safe and effective treatment for pain. A 2018 study demonstrated that 82% of Veteran patients reported an immediate reduction in self-reported pain after just one session of Battlefield acupuncture. Effectiveness persisted with repeated use.

Side-effects are extremely uncommon, but some people may include localised bleeding, bruising, brief euphoria, dizziness, lightheadedness, or emotional release

I cannot treat patients who are intoxicated with alcohol or drugs and I cannot put a needle on inflamed or broken skin.

Please let me know upon booking if you are:

We use cookies to improve your browsing experience on this site and assist in shopping and site membership. To find out more about how we use cookies read our Privacy Policy
CONTINUE
Internet Explorer Not Supported
Please Upgrade Your Browser

Get the latest updates on evidence-based integrative medicine and my unique advice on natural approaches to optimising your health, delivered straight to your inbox.

Anthrobotanica will use the information you provide on this form to be in touch with you and to provide updates and marketing. Please tick the Email box so we can contact you by email:

Thank you for subscribing to our newsletter.
Please check your email inbox for the opt-in mail.