I haven’t taken a conventional painkiller in probably ten years. I remember my twenties were filled with nasty migraines, and although I hated the idea of blocking pain because I wanted to be aware of the processes in my body that I felt were awry, I still remember being fairly reliant on Ibuprofen and the triptans to get me through the day when I worked in a very high-pressure job in investment banking.

I  still suffer regular headaches and neck pain due to spinal issues I’ve had since birth and fibromyalgia, but it has markedly improved since I switched my exercise habits, started running Frequency Specific Microcurrent (FSM) on myself, and became plant-based.  Life is stressful, the pandemic and lockdown have thrown an even bigger layer of unprecedented stress on all of us, and switching habits to primarily seeing patients on Zoom and using technology all day hasn’t helped. Making sure you get enough sleep is important if you need to address inflammation and pain. 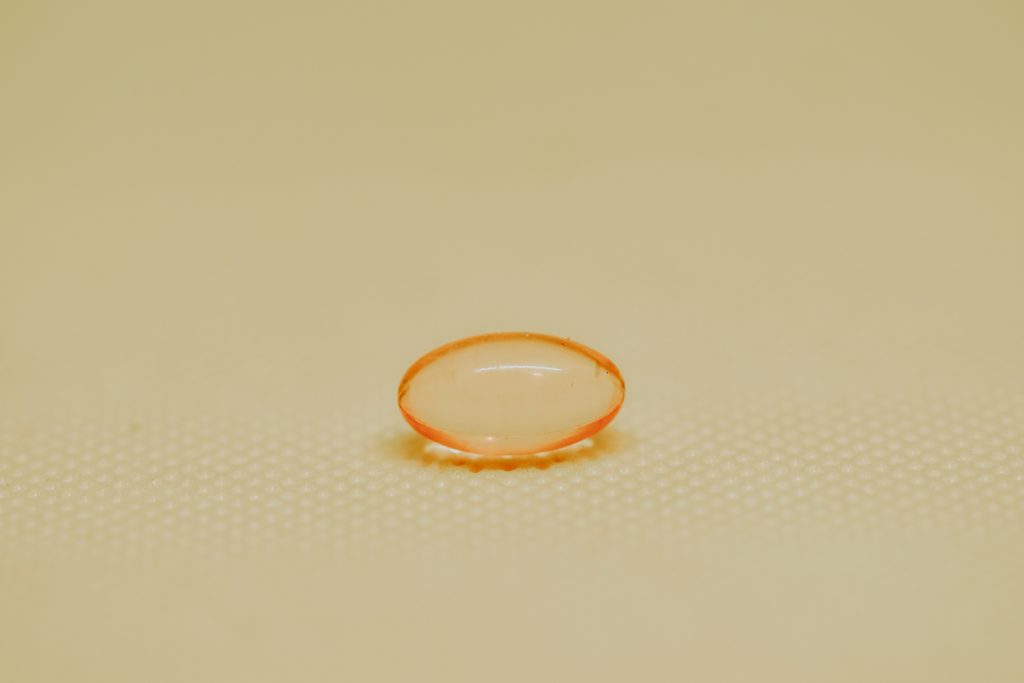 When I talk about fish oil in a therapeutic sense,  I refer to EPA and DHA,  two omega-3 fatty acids which enter the food chain through phytoplankton and are abundant in shellfish, sea mammals, and fish, with algae also containing high levels of DHA. Other plant sources of omega 3 fatty acids include linoleic and alpha-linolenic acid, which are converted to DHA but at a rate of around 6% and are dependent on various co-factors for this conversion. Sources include soy, nuts such as cashews and walnuts, flaxseed oil, blackcurrant seed oil, and hemp oil.

Historically, the ratio of omega-6 to omega-3 fatty acids was 1:1. Now the Western diet typically sees a ratio of 15 or 20:1, which has led to an increase in inflammatory, pro-thrombotic, pro-proliferative, and pro-constrictive metabolites derived from arachidonic acid, an inflammatory omega-6 fatty acid. This all plays a huge role in the pathogenesis of cancer, cardiovascular disease, cognitive decline, autoimmunity, and other inflammatory conditions.

I tell my patients (if they eat fish) to eat SMASH fish (sardines, materiel, anchovies, salmon, herring) and to go for wild versus farmed wherever possible as commercial farmed fish are often devoid of beneficial omega 3s and contain higher amounts of toxins such as PCBs, organochlorines and brominated flame retardants, particularly if they are given fish meal as a food source. Wild fish is not without its contamination risks, due to plastics in the ocean and other pollution.

Fish oil has been shown to reduce systemic inflammation and has benefits not only in the treatment of cardiovascular disease but in neurological, autoimmune, inflammatory, gastrointestinal and respiratory health conditions. It’s really effective for pain reduction.

I really highlight the importance of supplement quality here. Lots of patients come to me using supplements that are already highly oxidised. So keep your fish oil in the fridge or a cool, dark place, use capsules where possible, and yes practitioner brands! My favourite brands for fish and algal oils are Apex Energetics, Moss, Designs for Health and Metagenics. If you find your fish oil repeats on you, consider that you might have some fat malabsorption issues, and take with a meal alongside a digestive enzyme. 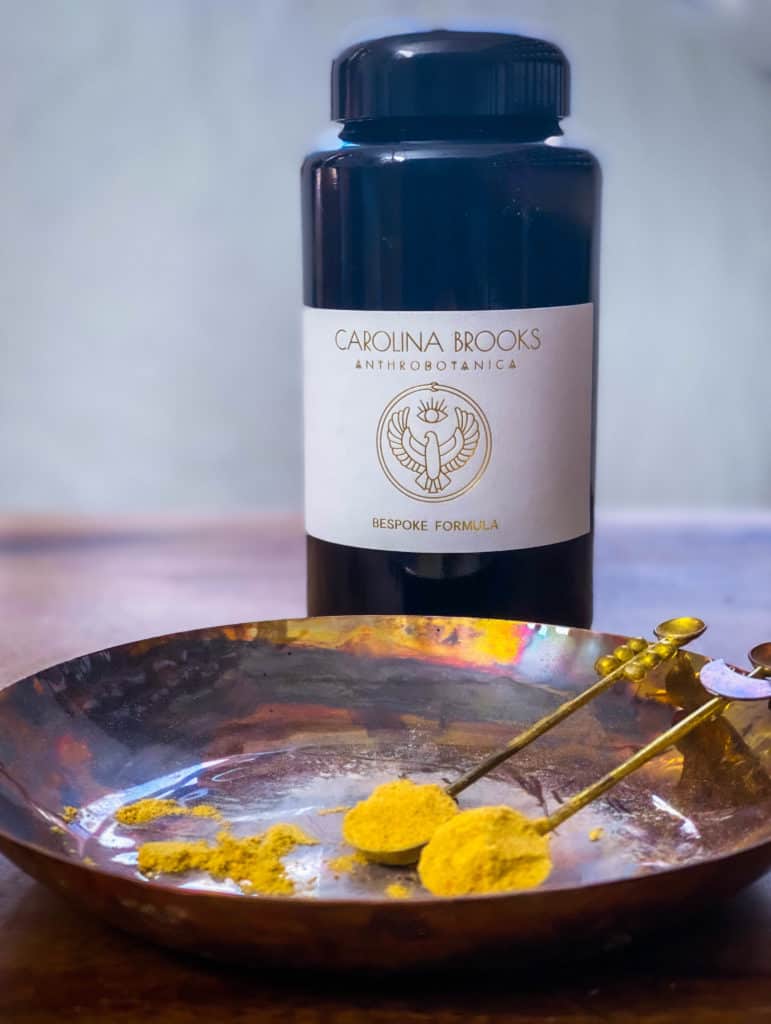 A key herb for inflammation, it’s also anti-cancer and hepatoprotective.  Turmeric contains flavonoids, the most famous being curcumin, resins, and volatile oils such as zingiberene and turmerone. Turmeric works by downregulating inflammatory cytokines and other compounds, and it’s a powerful antioxidant so it minimises damage caused by free radicals. It supports the liver by improving the conversion of cholesterol to bile acids in the liver and increasing glutathione levels.  I use it with my IBD patients (it’s great in an ulcerative colitis flare as an enema), and it’s a key herb to use in any cancer protocol when timed safely around medications.

Turmeric’s predominant compound is lipophilic, as well as being poorly bioavailable, which is why a good turmeric supplement will contain fat, pepper, or be in a liposomal form for better absorption. It’s best not to drink turmeric as tea, but it’s traditionally drunk as golden milk in the Ayurvedic tradition (you can see my recipe here), although some of the water-soluble compounds do demonstrate antioxidant and anti-inflammatory activity. 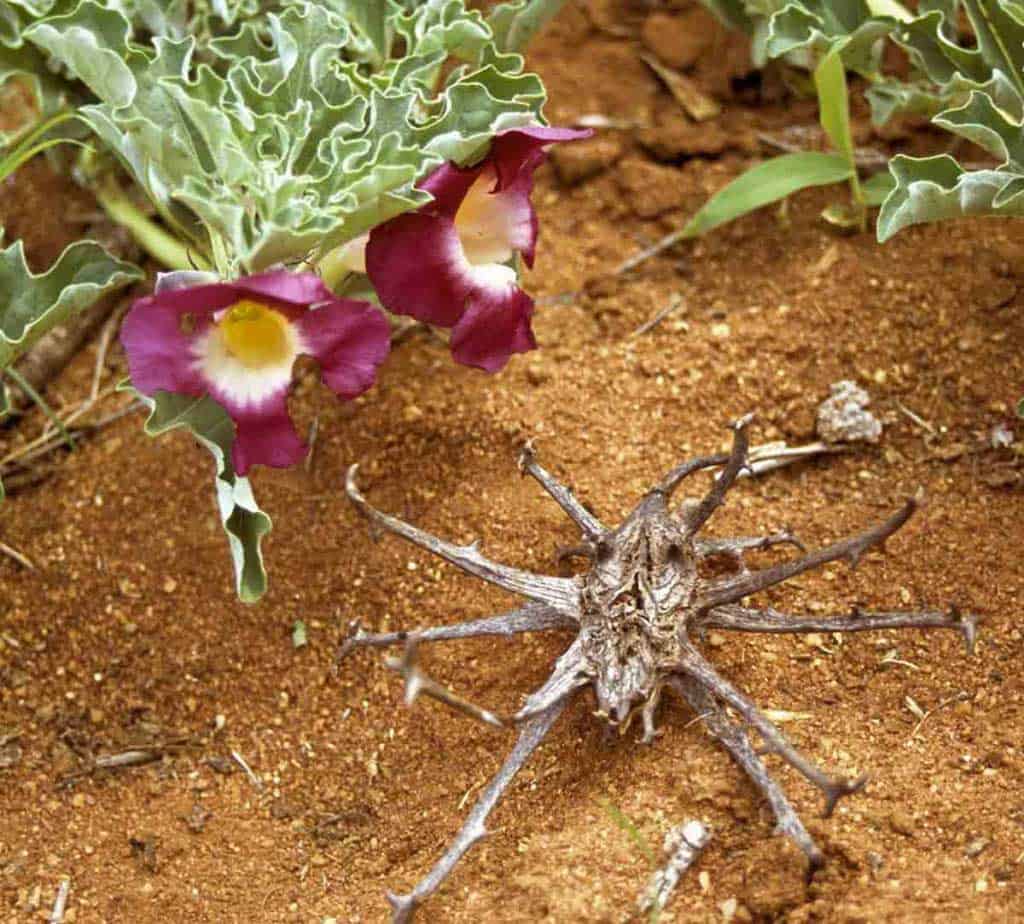 An incredible anti-inflammatory containing flavonoids, phenolic acids, phytosterols, and the iridoid glycosides such as harpagosides (also found in Figwort so I do use this a lot as it is more sustainable). It’s also known as wood spider and grapple plant, and is a green perineal with purple flowers. The name comes from the claw-like appearance of the fruit which splits open into hook-like tubes that make it look like a (terrifying) large arachnid. This is a key herb for rheumatoid and osteoarthritis chronic pain, fibromyalgia, muscle pains, migraines and it’s great for degenerative diseases of the musculoskeletal system.

Devil’s claw is a desert plant and it grows slowly in the Kalahari desert. Traditionally it’s been used for exorcism, purification, and removing unwanted energies.   l only use a tiny bit of this herb in a blend as it can cause digestive irritation and headaches in high doses. 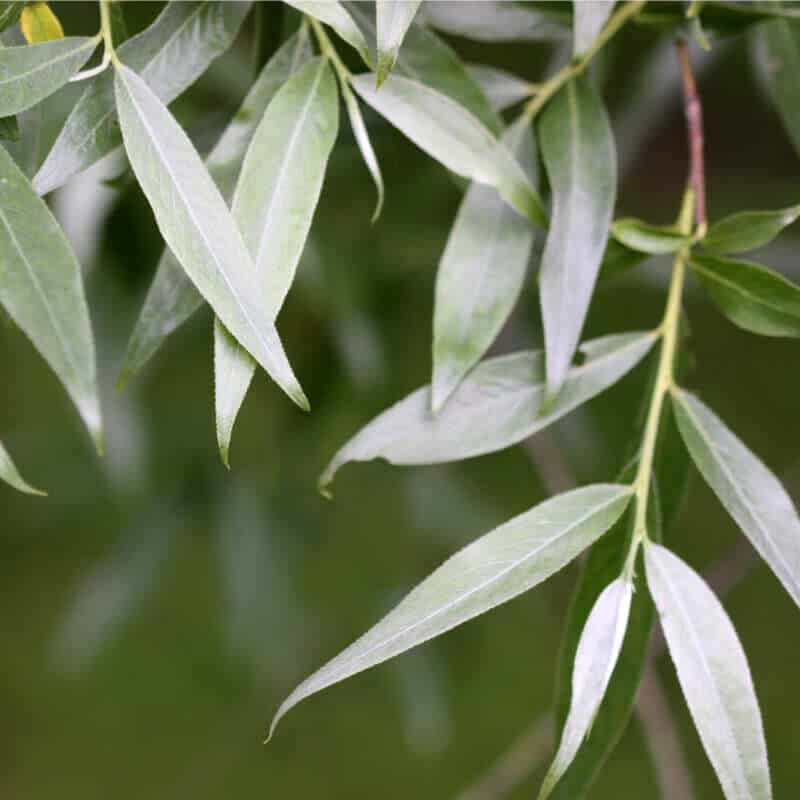 Did you know that aspirin was originally derived from white willow? The active ingredient, salicylic acid was first isolated from the bark in the 1800s by Bayer. The benefits of white willow over its synthetic pharmaceutical counterpart is that its analgesic effects last longer and they do not cause the same gastric side-effects as the salicin is absorbed in the bold to salicylic acid so the gastric lining doesn’t get irritated. To optimise conversion to salicylic acid, you can take it with probiotics. One of my favourite products is Willow Relief by Natura and I recommend it for use in cancer protocols, for inflammatory connective tissue conditions, for headaches and migraines, for injuries and swellings, and I actually recommend this for anyone taking a long flight.

Some people are hypersensitive to salicylates and they might experience urticaria and other atopic reactions if they take white willow. Another interesting thing to flag is that in high doses, salicylic acid can induce transient hearing loss in zinc-deficient individuals as it inhabits Preston (a protein found in the inner ear of the cochlea).

Another great herb for ulcerative colitis and other inflammatory bowel conditions, frankincense has been used for thousands of years during religious ceremonies, and was even found in Tutankhamen’s tomb. It’s renowned not only for its spiritual properties and ability to open the mind from ancient Egyptian times, but it’s used in Ayurveda as a nervous system stimulant and analgesic, and I use it in clinic for its powerful anti-inflammatory, analgesic, anti-arthritic and antispasmodic properties. It’s also a powerful biofilm breaker, and useful in skin conditions in aromatic water, or a topical oil. It’s also great for sore throats in an infused honey.

One of the things a lot of people don’t know about frankincense is that it’s an incredible nervine herb, with anxiolytic properties and as a nootropic. The resin, which is the part we use that is secreted from the bark when slashed, contains volatile oils and alpha-pinene, which modulate GABA and glutamate activity as well as improving acetylcholine activity. Frankincense contains incensole acetate, which signals proteins in the brain associated with feelings of reward, reduces feelings of anxiety and along with boswellic acid, helps to reduce pain and feelings of depression. 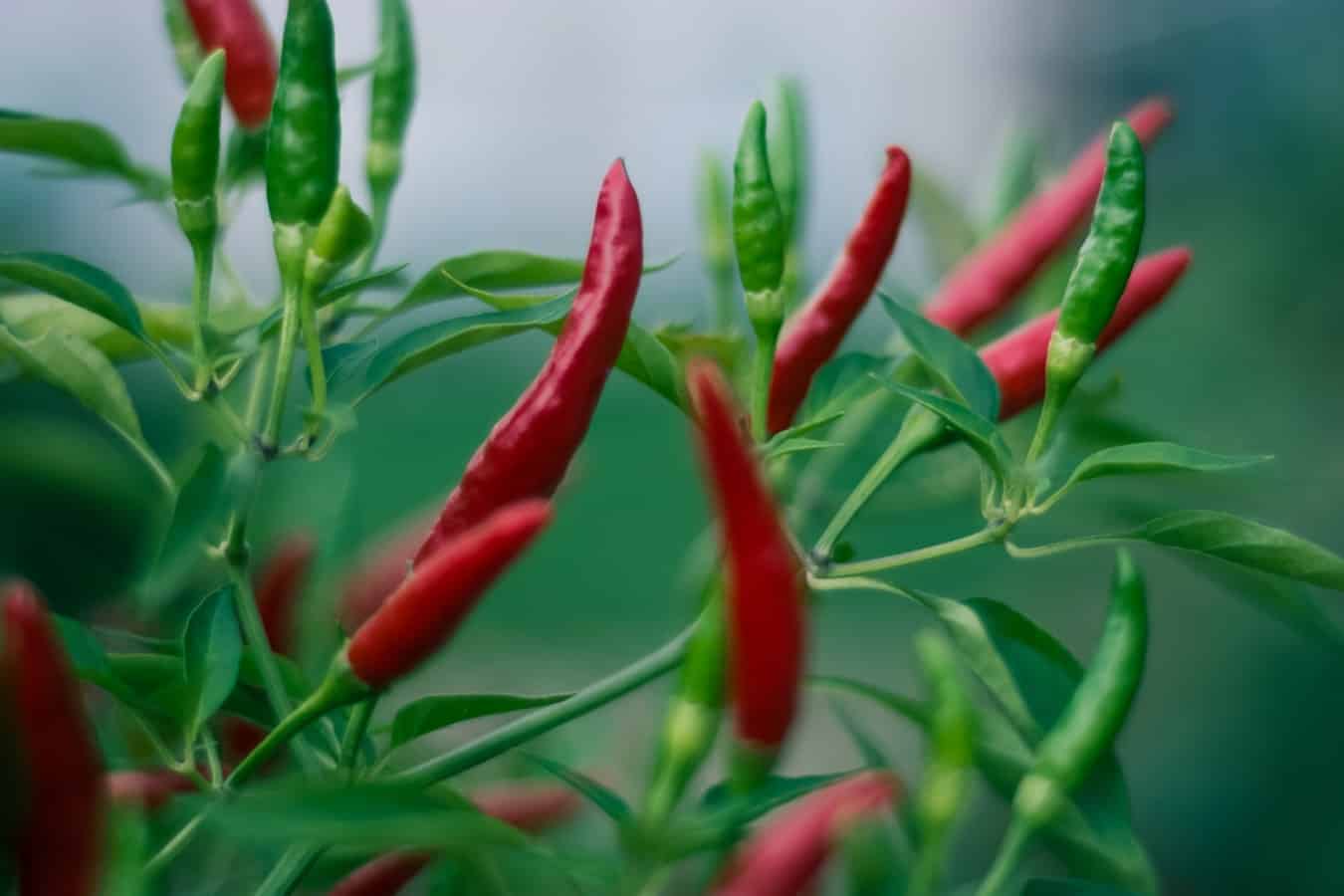 Native to Mexico, cayenne was brought to Europe by Columbus in the 16th century. It has traditionally been used to revive people after heart attacks (something I have never personally tried!). It is a thermogenic stimulant so great in a herbal formula as part of a weight-loss support protocol as it naturally increases metabolism, is antiseptic, rubefacient (brings blood to the surface), and analgesic, and particularly good for topical formulations (it’s a key ingredient in my “miracle” oil) for pain, wounds, bruises, and spasms. It is a circulatory stimulant so helps to improve blood flow, which expedites healing.

The capsaicinoids in cayenne block pain and deplete substance P, which transmits pain signals to the brain, so it’s great for neuralgia, neuropathies, headaches, and joint pains. I love to put it in a herbal gargle formula, and it does go into my eyewash blends a lot of the time. 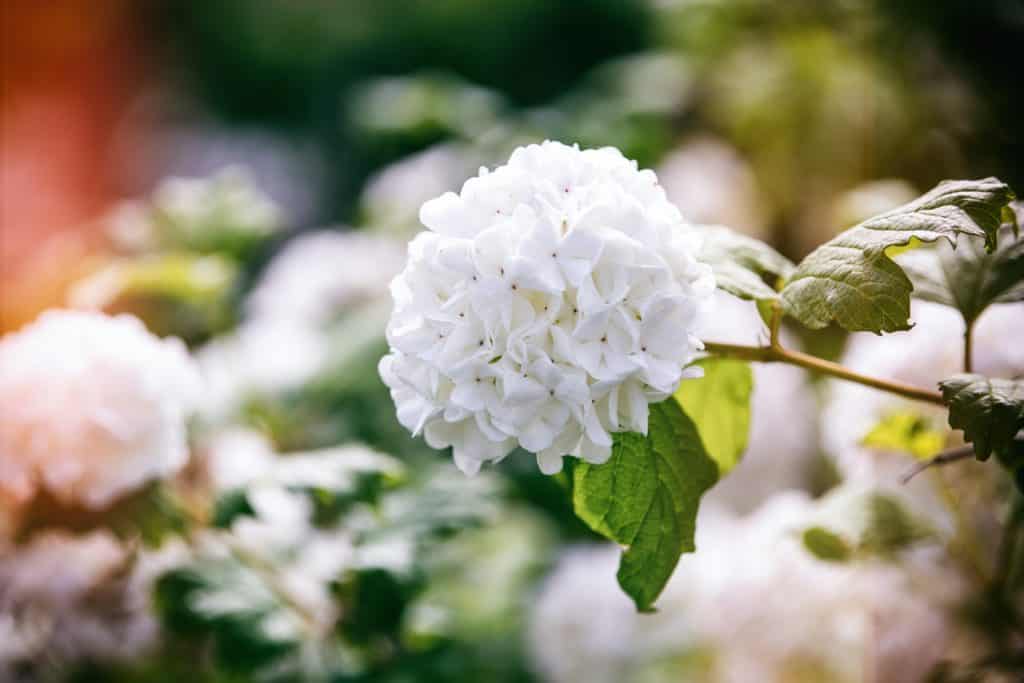 The clue is in the name. This is a key herb for cramps and spasms, and is one of my favourites for anyone suffering from period pain or urinary tract spasms. It’s great for irritable bowel symptoms and irritating coughs, and for muscle spasms for neuromuscular conditions like multiple sclerosis and Charcot-Marie-Tooth disease. Cramp bark also contains salicylates which have anti-inflammatory and analgesic properties. It also contains Valerianic acid, an anti-inflammatory alkaloid also found in valerian, and coumarins (scopoletin and scopaline) which have uterine relaxant properties. It has historically been used in the native American tradition as an anti-abortive agent and to prevent uterine prolapse.

Don’t go picking the fresh berries of these and eating them, as they are toxic. We use the dried bark medicinally.